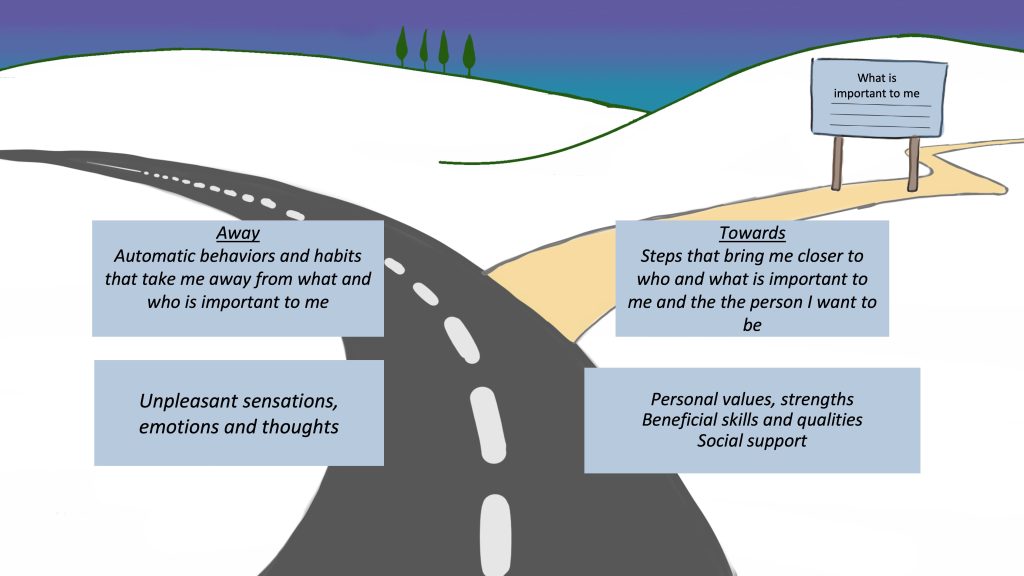 The ACT Choice Point Model is a model of human behavior and decision-making developed by the organization ACT (Acceptance and Commitment Therapy). It suggests that people are constantly faced with choices in life, and that the choices they make determine the direction of their lives. According to the model, there are three key elements to making choices: values, goals, and actions. Values are the things that are most important to a person and guide their decisions and actions. Goals are the outcomes that a person wants to achieve, and actions are the specific steps that a person takes to achieve those goals. The ACT Choice Point Model suggests that the choices a person makes at any given moment are influenced by their values, goals, and actions, and that these choices ultimately determine the direction of their lives. By focusing on their values and goals, and taking actions that are consistent with them, people can make choices that are more meaningful and fulfilling, thereby supporting well-being and a sense of flourishing and development in their lives.

During the first session of the purple staff training on year 1 of the program, teachers are introduced to this model which incorporates strong elements of mindfulness (e.g. practicing the ability to pause in order to notice and reflect intentionally on one’s thoughts, feelings and actions as opposed to being on “auto-pilot”, thus being less reactive and more proactive in one’s personal and professional life). After that, the model is used repeatedly by the teachers to explore and reflect on one’s thoughts, feelings and actions in different settings in light of one’s personal and professional goals and values (in interactions with family, friends, colleagues, students, parents etc.). Teachers explore what are the internal and external barriers they encounter which may hamper the ability to act according to their values thus moving them away from their chosen life-goals, as well as the strengths and supports they have which increase the chances of behaving in a values-congruent manner and move them closer to these goals. The model thus supports the development of a nuanced understanding of one’s psychological world as well as one’s behavior in context, helping teachers become more aware of their mental models and the way these models direct their actions in the world. Use of the model supports teachers’ mindful ability to pause and reflect with awareness about their decision making process so that they can make decisions and generate behaviors that reflect their values and the qualities which they wish to embody in their personal and professional lives. Importantly, the model can also be used at the organizational level to map decision-making processes in the school as a whole.

The 3 Rooms Model is a model developed by the Purple Lab that is used from the 2nd year of the program onwards as part of the purple staff training (this model is also introduced and used in the Purple Leadership Training). The model is based on the principles of contemplative pedagogy and systems thinking, emphasizing the importance of experiential learning, self- and social-awareness and the generation of internal knowledge and insights in the learning process. This process is grounded in a wide context relating not only to the learner as an individual or to their immediate environment, but also to wider contexts which they are a part of (e.g. the whole school community, the neighborhood or the city where one lives etc.), thus nurturing compassion and ethical thinking and action. The model is implemented in class, but can also be used in any learning or development process taking place in the school (e.g. staff training or meetings). When used in class during a lesson, students are presented with a question or a task related to the curriculum but also connecting the subject matter to the student’s lives. They are invited to go into the “personal room” to think about this question, perform the task, reminisce about relevant personal life events etc., and are asked reflect quietly and write down their sensations, feelings and thoughts (they can also use other means of expression, such as painting etc.). Next, students visit the “interpersonal room”, also called the “duet room”. They divide into pairs and share the products of their reflection while practicing interpersonal skills such as deep listening, kindness, openness, a non-judgmental approach, empathy etc. Finally, the students visit the “communal room”. Here they work in bigger groups (3 – 5 people or more) or share with the whole class, still honing interpersonal skills, but also contributing to the class as active and valued members of a community, while being exposed to many view-points and experiences, thus learning to notice and appreciate interpersonal differences in the way people experience reality (different mental models), as well as common humanity and shared values and goals. Work in each room employs various didactical and pedagogical methods that nurture and develop mindfulness and SEL skills. 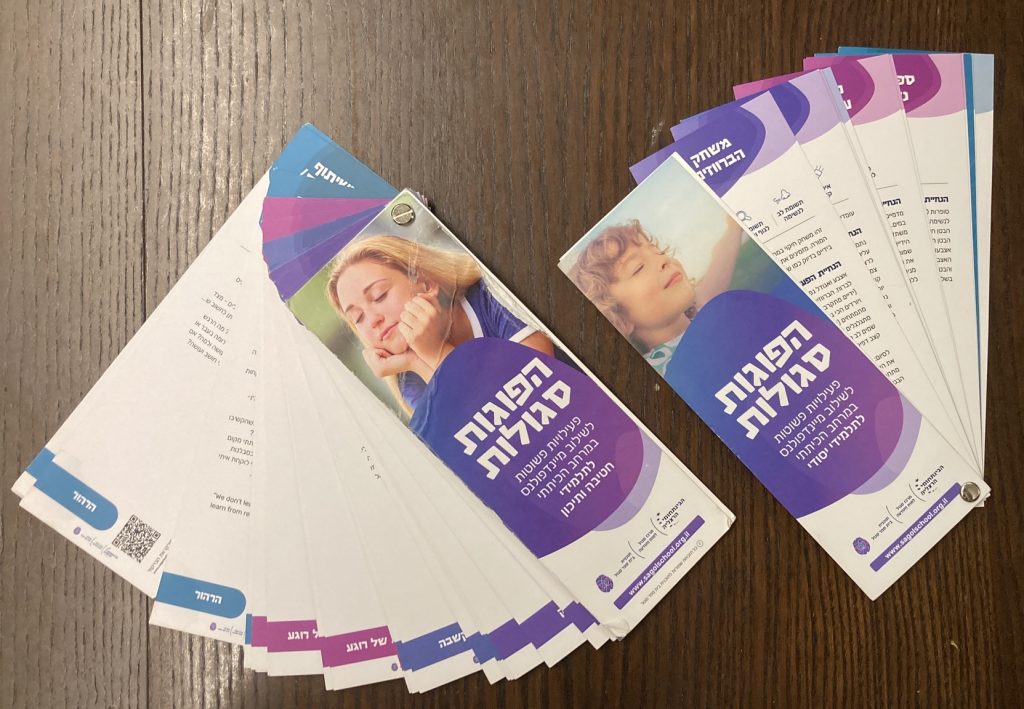 The Activities Fan, developed by the Purple Lab, is a collection of cards divided into 4 categories: (1) games and movement, (2) activities in pairs, (3) a moment of calm and (4) reflection. Each card contains guidelines for a short mindful class activity that teachers can incorporate during lessons (for example, the category “a moment of calm” contains a short body scan activity, while the category “games and movement” contains a mirroring in motion exercise). In addition, each card depicts the icons relevant to that activity (i.e. which skills are we training when we are practicing a chosen activity). The fan has two versions, one of elementary school and one for middle and high school. The fan was developed as a means to support teachers who want to incorporate mindfulness and mindful routines into their lessons (e.g. opening each lesson with an exercise that supports attention and focus, or one that develops empathy), but are yet not confident enough to develop their own exercises and need a “scaffold”. As such, the fan is a skill building tool not only for the students, but also for the teachers, and supports their need for competence when implementing new pedagogies. In addition, because the fan offers a wide selection of exercises, each teacher can choose the ones they are more comfortable with, again, supporting a sense of competence but also a sense of autonomy through choice. This increases the chance that teachers will use the fan and that mindfulness in the school will not only be used at the personal level (i.e. help a teacher regulate stress better), but also at the pedagogical level. At the organizational level, use of the fan (that also incorporates the icons), supports a system-wide implementation of mindfulness and SEL as part of the pedagogy and – as mentioned above – fosters the creation of a “Purple” school language and culture, strengthening a sense of community with shared educational values and goals.